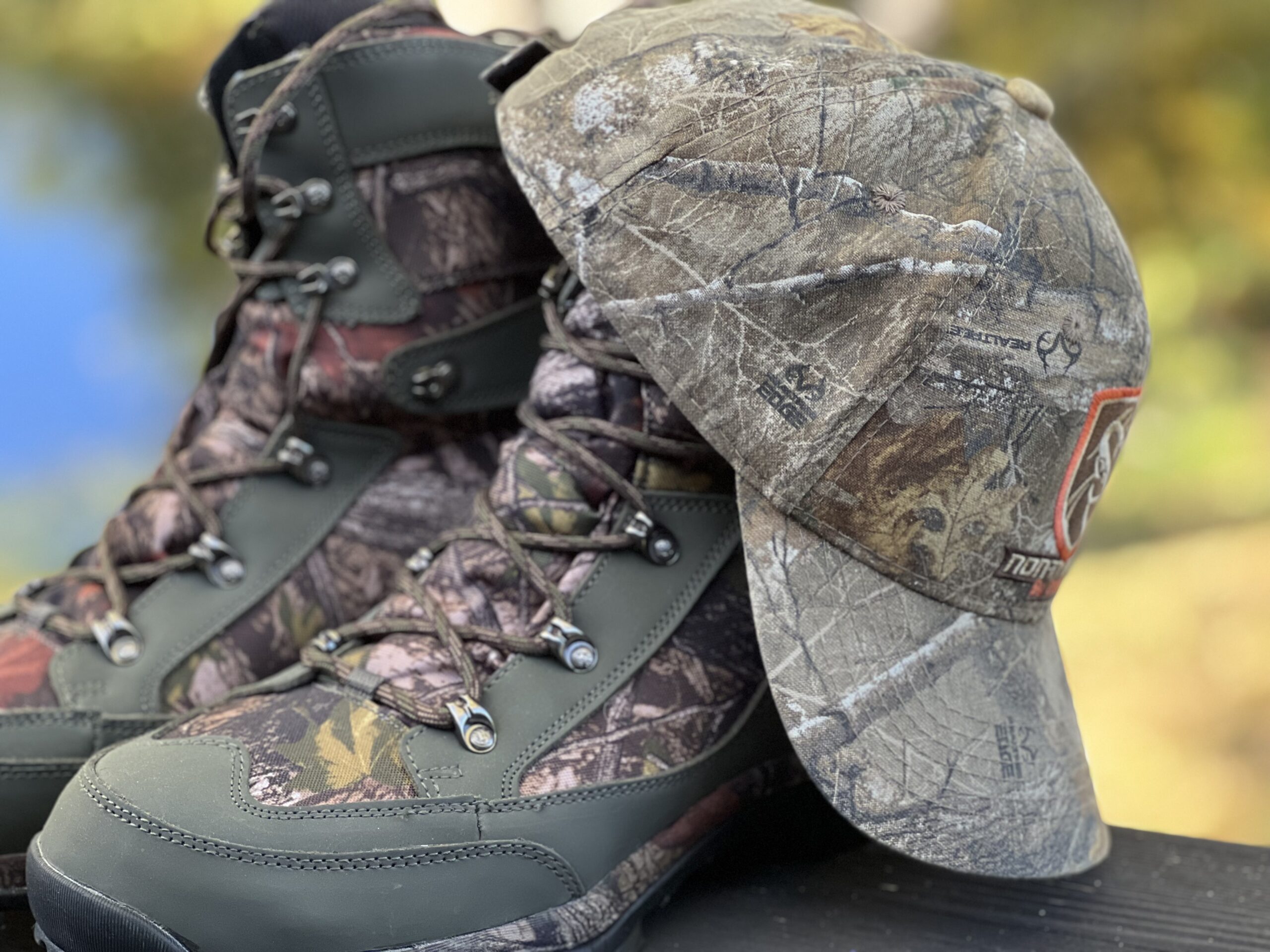 I didn’t grow up in a serious hunting family, but I married into one. I learned early on that for inveterate hunters the time between October and December is untouchable. And for true devotees, the rituals of the season begin much earlier: ordering licenses, target practice, and buying gear—all in a cloud of camouflage.

For years I was mystified by the appeal of camo. When my bowhunter husband bought me a heavy camo winter coat many years ago, I rolled my eyes and stuffed it in the closet. not my style

But now camo is ubiquitous in the Midwest. Step into any sporting goods store or superstore and it’s like stepping into camouflage land. The familiar khaki and olive patterns appear on clothing, hunting gear, coolers, sheets, blankets and even furniture. And not just for hunters. Cars, trucks, ATVs, and kids’ bikes are cloaked in camouflage, and women’s fashion is increasingly incorporating the look into a cacophony of non-traditional colors.

I’ve always wondered why camo is so popular, so I did a little digging. I discovered that camo as we know it is relatively modern and largely a marketing phenomenon, whether most hunters and consumers are aware of it or not. Which led me to think that like all fashion, camo communicates something important about who we are and our culture in general.

The origin of the word camouflage comes from Italian Camuffare (to disguise or deceive) and the French camouflage (dress up). Camouflage occurs regularly in nature; It is a defense system that animals or organisms use to camouflage themselves by changing their physical appearance. Think of the coloring of chameleons, puffer fish, zebras or lions that blend into their natural environment and allow them to hide from their enemies.

While it is logical to think that humans would employ this clever survival trick, humans did not use camouflage printing for warfare or hunting for most of Western history. War was fought face to face and hand to hand, with soldiers wearing armor or uniforms that protected them physically and clearly distinguished them from their enemy.

It wasn’t until the invention of the modern rifle in the mid-1880s that armed forces began to camouflage themselves with special clothing. Khaki was introduced in the mid-19th century when British soldiers in India began dyeing their bright white uniforms with tea to reduce the troops’ visibility from the countryside. I found the tea treat particularly delightful.

Camo evolved during World War II as air raids and long-range artillery expanded the field of fire and created new demands for visual illusion. French visual artists – named camouflages – were hired by the French Army to paint patterns to conceal equipment. Stumbling upon this fact, an image of cubists in jaunty berets applying brushstrokes to huge tanks stuck in my mind. Soon after this war, various branches of the military began mechanically printing patterns on fabric, and the adoption of camouflage – both the word and the pattern – continued in subsequent wars.

Camouflage colors were not developed specifically for hunting until the 1970s. A Virginia schoolteacher named Jim Crumley was intrigued by the idea of ​​using military camouflage tactics to improve his hunting effectiveness. Crumley experimented with printing different designs onto plain clothing. His company, Trebark, introduced a line of camo apparel in 1980, starting an industry.

Hunters quickly gravitated towards the different types of camouflage patterns with patterns tailored to the region and species: Woodlawn, Brush, Waterfowl/Marsh, and Snow/Winter. Today, Trebark, Realtree and Mossy Oak are retail giants in an industry that generates billions of dollars in sales worldwide.

When I mentioned this schedule to my husband, he challenged the facts and argued that camouflage for hunting started much earlier. But when it came down to it, he didn’t recall his father ever wearing camouflage, and he remembered hunting in jeans as a kid. it just seems as if camo has always existed.

The camouflage clothing explosion of the late 1980s and 1990s has been variously attributed to an upsurge in hunting and the growth of the media. The resurgence of wild turkeys and growth in the white-tailed deer population contributed to a hunting boom.

At the same time, new television channels and the introduction of videos in the media and internet allowed camouflage manufacturers and marketers to flood the market with images of successful hunters, dressed in patterned products and posing triumphantly with their trophies. The effectiveness of wearing or using camo to improve hunting results has never been scientifically proven, but hunters kept buying.

After the Gulf War in the 1990s, civilian camouflage began to gain popularity. Designers like John Galliano and Anna Sui added camo patterns to golf apparel and the trend took off. Today you’ll find camo patterns in pink and blue and neon, from haute couture to Crocs. In fact, Balenciaga just stunned on the catwalks of Europe with a camouflage Croc. Over the past decade, vehicle and retail manufacturers have piled aboard the camo juggernaut.

Who are we when we wear or show camo? For hunters, while camo hasn’t been proven to fool game, it’s part of preparing for the hunt. At each ritual – baptism, communion, marriage, funeral – we are clothed in a special robe for transformation; Buying, packing and donning multiple pieces of camouflage clothing is part of the process of evolving from mortal to hunter, an individual with a different mindset – ready for murder. And wearing a common uniform bonds a group and connects a person to an activity or an identity.

I asked my husband about the binding and the ritual of hunting and camouflage. Not surprisingly, his response was that he and his brothers and buddies only wear camouflage because it helps them hunt better. How? I asked. It disguises us from the deer, he said.

What about those bright orange vests you’re all wearing, I asked – doesn’t that kind of ruin the disguise? Good point, he laughed. He shook his head at the ritual part and said: It’s all about the hunt. But you go through the same process every season, meticulously preparing and wearing the same clothes, right? A taciturn man, he nodded, which I took as agreement.

Hunting aside, what does it say about us as a society or as a region that we have embraced Camo into civilian life with such enthusiasm? Does it mean that we identify with the military or with the hunt? Is it about patriotism or protection – consciously or unconsciously? That we belong or want to belong to a tribe or like-minded community?

From its origins in nature, the military, and hunting, the concept of camouflage serves to camouflage, to deceive, an enemy or enemy. At its core, camouflage patterns mean something primal, part of a cycle of life and death. But with our camo obsession, it’s unclear – are we trying to blend in, or are we trying to stand out?

Sometimes, when it’s particularly cold, I pull out the down-filled camouflage puffer coat to run errands. I fit right here in Heartland. And it doesn’t even feel ironic anymore.