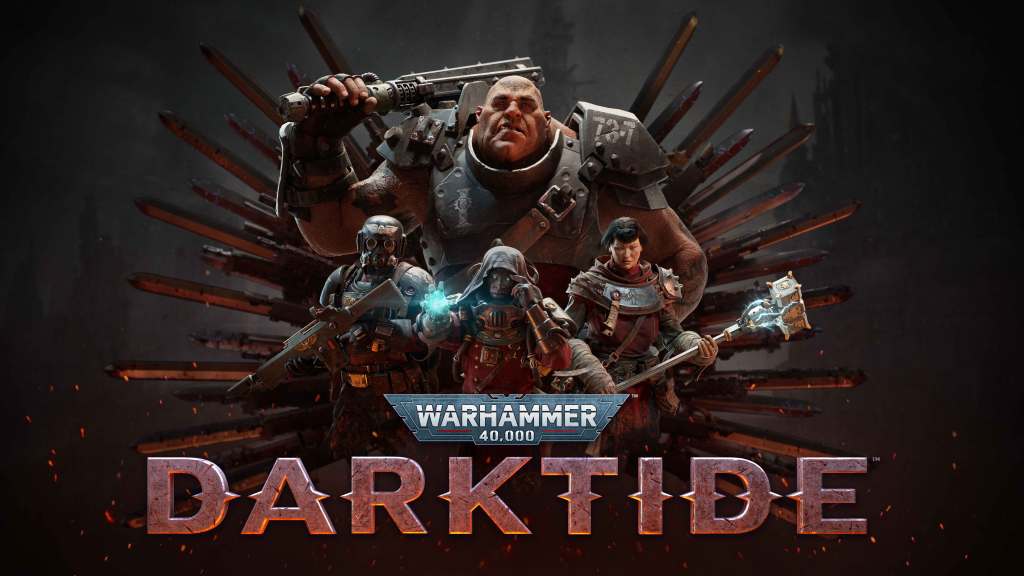 Fatshark deserves more credit for what it has done. Over the past decade, the Swedish studio has identified Warhammer as a franchise that deserves more love, and fused it with a genre that works surprisingly well in the fantasy setting.

The vision was the hit Warhammer: Vermintide series, and it showed that cooperative online first-person play could work in the context of swords and sorcery. The developer showed how creativity can still squeeze out a great time in a genre that “Left 4 Dead” popularized and still dominates.

ADAPTING THE FORMULA TO A SCI-FI
Now, Fatshark is setting its sights on an even bigger franchise in the Game Workshops stable. With “Warhammer 40,000: Darktide” the developers take years of work on “Vermintide” and adapt it to the sci-fi universe.

The online cooperative game takes place in the beehive city of Tertium on Atoma Prime. Players take on the role of inmates who forced drafted to fight in the area after being plagued by the Admonition Chaos Cult and the treacherous support of the Moebian Sixth Regiment. As subordinates to the Inquisitor Lord, players start out with pretty poor gear and must gain levels and gain the trust of the Empire’s secret police.

MEET THE FOUR CLASSES
To do this, you must complete a series of missions and investigate the mysterious events on Tertium. Players can choose from four classes: Veteran Sharpshooter, Zealot Preacher, Psyker Psykinetic, and Ogryn. Players can choose their character’s place of birth and defining moments in their story, including the reasons they were imprisoned in the first place.

From there they are taken to a common area where they can visit shops and other facilities. But in order to actually access these, players need to level up, aka gain trust, and to do that they need to go through missions.

Fatshark recommended players to start off easy, as combat in Darktide can get out of control very quickly. The campaign missions will have some scattered enemies, but players will encounter scenarios where zombie-like creatures, rival Space Marines, and even mutant creatures descend on the squad.

A CLOSER LOOK AT THE CHARACTERS
With such a wide range of enemies, it’s good to bring a diverse squad with players who know how to fill their roles. The skilled sniper relies heavily on shooter mechanics and is ideal for sniper popping and frontline support classes. The downside is that players rely heavily on ammo and that can be rare.

The Zealot Preacher is the melee fanatic. They wade into the hordes and hack and slash away, although health can be an issue. At the other end of the spectrum, the Psyker Psykinetic is Darktide’s space wizard, capable of dealing heavy damage. It’s a glass cannon-like build and that means it’s suitable for intermediate players who are comfortable with a high-risk, high-reward playstyle.

Finally, the Ogryn Skullbreakers are the group’s tanks. When the Zealot is offensively tuned, the Ogryn is all about taking punishment and drawing the enemy’s attention so other members of the four-man squad can dish out damage.

SPECIAL ABILITIES, BENEFITS, AND AURA
Each character has a special move that requires a cooldown after use. The Zealot charges forward, covering a lot of ground, with the first strike being a guaranteed critical hit. It’s good for dealing with elites or bosses. The ogryn charges forward in a straight line, knocking down enemies left and right. It’s a good way to control the crowd when the group is feeling overwhelmed.

With Volley Fire, the Sharpshooter assumes a firing stance, allowing the character to deal more damage, while also automatically identifying Elites and Specialists as priority targets. Finally, the Psykineticist’s Wrath resets the dangers of the Warp Gauge to zero and staggers enemies in front of you.

Additionally, each class has a specialized grenade based on strengths, and each role has its own set of unique weapons. They are further differentiated by iconic perks of each class, offering boosts in stats or powers tailored to their role. For example, the tanky Ogryn has Excessive Power, giving it +25% Melee Stagger; Loyal Protector, which allows them to revive or support allies without being interrupted by damage; and Thick Skin, which gives the class +20% Tenacity, Damage Reduction, and +20% Health Damage Reduction.

Finally, the characters have an aura ability that depends on unit coherence, a concept from the original tabletop game. Coherence works differently in Darktide, as units with auras are boosted when they are within a certain distance of each other. On the Psyker, the Aura increases attack power, while the Zealot increases toughness, which is essentially a regenerating shield that every character has.

A FUN AND FAST CO-OP EXPERIENCE
Each of the missions I played in the closed beta lasted between 20 minutes and a little under an hour. It all depends on the difficulty, with the higher levels taking more time. Players will have to contend with tougher enemies and larger swarms of enemies. I mostly played Quickplay, which led to some unusual squad combinations. I rolled with two Ogryns while another time I was with three Zealots and a Psyker. It’s better to be versatile and have a group with different skills so players can handle unexpected situations.

As for the level layout, players need to get from point A to point B. Along the way, they find devious routes that open up the possibility of ambushes. Players will also encounter situations where they are besieged by a barrage of enemies and squads must carefully coordinate. The closing finale is usually the most difficult scenario. I had to deal with a boss that would summon swarming hordes when his shields fell. In the finale of another mission, my squad had to collect batteries and pack them into a carrier. Easier said than done when rival Space Marines and hordes swarm players. In fact, it’s a bit hectic.

At the same time, it shows the mastery that Fatshark has developed over the years when it comes to developing cooperative games. They know how to make levels and experiences fun with a built in pacing director and level design.

In terms of game balance, some classes were more melee-focused than ranged, but both types of weapons have their roles. Even if you’re using the melee-heavy Zealot or Ogryn, players will find opportunities to use their weapons. Again, Fatshark creates the right place for these weapons to be feasible.

All of this makes the core game feel polished even in the closed beta and puts Darktide at the top of my must-play list for the holiday season. With a progression system that rewards leveling up by giving players new weapons, it will lure fans with hopes of new gear. After players reached the level cap, the developers said progression was more horizontal. It could mean players are looking for the right gear for their build.

Warhammer 40,000: Darktide is slated for release on November 30th on PC. It will also be released for Xbox Series X and Series S.