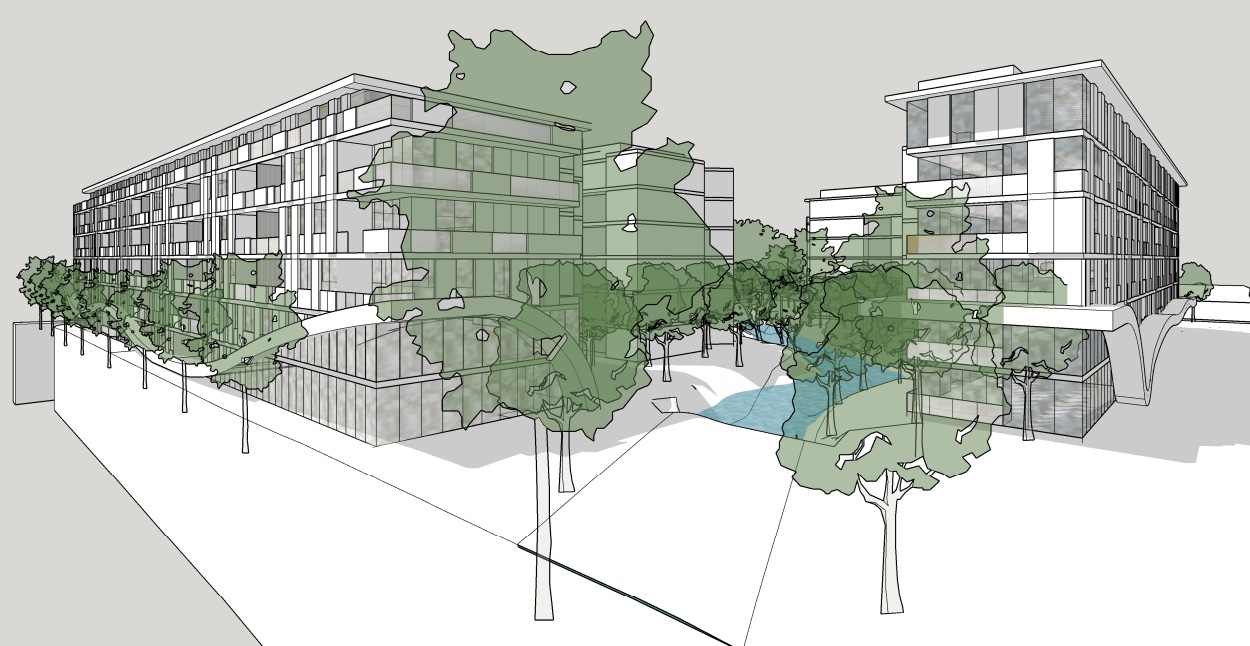 A developer’s plan to build hundreds of apartments on the El Camino Real site currently occupied by the Creekside Inn appeared doomed Monday night after the city council deemed the project too big, too dense and too controversial to move to get a permit.

The development proposed by Oxford Capital Group would see the hotel at 3400 El Camino Real demolished and replaced with two buildings, one with 316 apartments and the other with 66. Each building would be six stories tall and 61 feet tall.

The Oxford development is the latest in Palo Alto’s recent wave of Planned Home Zoning (PHZ) projects, which are allowed to exceed zoning regulations in exchange for providing housing. Over the past two months, council members had given generally positive feedback on other PHZ projects, including a 20-condo project proposed near Town & Country Village and a 75-condo project planned for the 800 San Antonio Road was proposed.

In both cases, council members used their “pre-review” hearings to encourage developers to submit formal requests with some revisions. In any case, they cited the need to drastically increase housing production to meet a government mandate of 6,086 new housing units between 2023 and 2031.

But when it came to the Creekside Inn project, council members agreed the developer was asking too much. Echoing neighbors’ concerns, council members condemned the possible demolition of Creekside Inn, Driftwood Deli and Market and Cibo Restaurant, three businesses to make way for the new homes. Critics also noted that the proposed development would require the removal of more than 100 trees, that the El Camino site is near a toxic underground cloud, and that the builder’s proposal to place a vehicle entrance on Matadero Avenue, a popular bicycle corridor would endanger.

“We’re now in an election cycle, so there’s been a lot of talk about supporting good projects, but not necessarily every project,” Councilor Eric Filseth said during Monday’s discussion. “This council has seen some good proposals over the past few months for which we have signaled support.

The developer has also faced stiff opposition from the immediate community, with the Barron Park Association voting last month to officially oppose the project. In a letter to the city council, the board of the Neighborhood Association described the project as “massively over-designed” and argued that it would “pose a multitude of density-related environmental and traffic problems to this area”.

“If built as proposed, this project will eliminate two local businesses that the surrounding neighborhood depends on, as well as a 136-room hotel to support business travelers and other visitors to Palo Alto and Stanford, and revenue for the city and state.” delivers.” says the letter from the neighborhood. “The profound impacts on water use, waste management, parking, the environment (with potential toxic damage to Matadero Creek), and privacy will disrupt life, bring unnecessary stressors to neighborhoods, and increase traffic tenfold.”

John King, president of the Neighborhood Association, said Monday that the Barron Park neighborhood generally supports the creation of new housing across the city once suitable sites are identified.

“The currently proposed preliminary review of the Creekside Inn redevelopment appears impracticable in a number of respects,” King told the council.

Others argued that development in terms of affordable housing was lagging far behind. By law, any proposed home zone project must offer 20% of its units below market price. In this case, that would be 76 income-restricted apartments.

However, as proposed, half of these units would be for residents in the “moderate” or “above moderate” categories, targeting residents between 80% and 140% of the area’s median income (for a two-person household, 140% standards equates to a total income of $188,729). Sheri Furman and Rebecca Sanders, co-chairs of leaders at umbrella organization Palo Alto Neighborhoods, were among those who argued that this is not truly affordable housing.

“The proposal essentially asks residents and the city to take on a private developer’s massive project with mostly off-the-shelf housing,” Sanders and Furman wrote. “Instead, we should reserve upzoning for applicants who propose homes at 100% below market price, to ensure they win the bidding war for recoverable land.”

While opponents argued that the project was large for the site, project manager Ted O’Hanlon countered that its density was comparable to other housing projects the city had recently reviewed and, in some cases, approved. This includes the Wilton Court development, now nearing completion at 3702 El Camino Real, which will provide 58 apartments for low-income residents and adults with disabilities. The main difference, O’Hanlon said, is the size of the project site.

“The greatest thing about this site is its size,” O’Hanlon said. “This is a 3.6 hectare site.

There aren’t many of those in Palo Alto. If you look at any of the proposals for proposed housing developments that have come in in the last year, two, three years – if they’re an acre big, they’re big. This is three times as high.”

Economist Steve Levy also urged the council to move forward with the project, noting that residents’ concerns could be assessed and mitigated as part of the permitting process.

“This project brings tremendous benefits in terms of unit count, unit count below market price – it’s more than Wilton Court – a location with excellent access to jobs, shopping, services, amenities and transit on a major corridor, El Camino that the city has identified for many apartments,” Levy said.

Council members, however, were undeterred. While Councilor Alison Cormack lauded the project to house healthcare workers and Councilor Greg Tanaka praised Oxford for accommodating many studios (which he thought would of course be affordable), their peers unanimously rejected the proposal, making it highly unlikely that Oxford would proceed with a formal application.

Mayor Pat Burt noted that as part of the application, the developer asked the city to waive all or part of the approximately $21 million in impact fees it would be required to pay under the project. The fees are intended for the construction or expansion of parks, libraries and community centers.

Burt strongly opposed the waiver motion, noting that the city would already lose the hotel taxes that the Creekside Inn currently collects if the motion goes ahead.

“We don’t have the resources not only to lose this hotel tax, but also to subsidize developers at market rates and their commitments for proportionate investments in new infrastructure needs,” Burt said.

Some of his colleagues were even more opposed to the project. Councilor Greer Stone lamented the potential loss of driftwood, a popular neighborhood staple. While Oxford has debated the possibility of Driftwood occupying the 4,000-square-foot retail component of the project, Stone suggested it would be difficult, if not impossible, for the company to stay alive during construction, which is expected to take at least two years .

“I’d rather have a somewhat concrete plan than a somewhat hollow promise that they will have a place to go back to,” Stone said. “Because we all know that’s not going to happen.”

Deputy Mayor Lydia Kou called Oxford’s waiver request “ruthless” and wholeheartedly agreed that Matadero Avenue is too valuable as a bike lane for commuting to accommodate the housing project.

“We want Safe Routes to School to be successful,” Kou said. “So let’s keep the road safe and stop placing these outrageous developments in these places.”